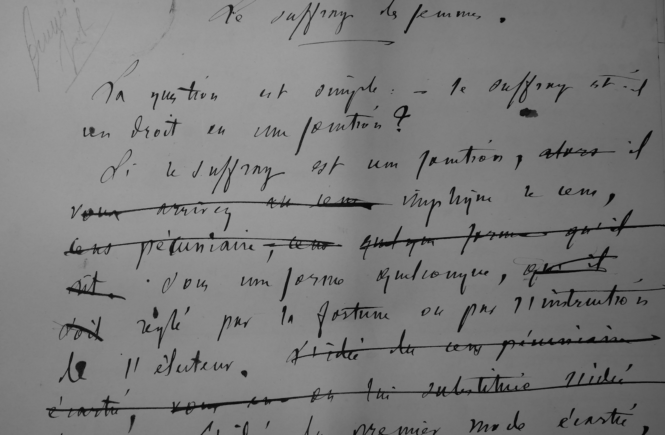 Speech before the electoral commission of the Cercle des Familles.

The question is simple: is suffrage a right or a function?

If the vote is a function, it implies the cens, in any form, based on the wealth or the instruction of the voter. Once the former is disregarded, the latter remains alone; it involves examination, some sort of trial: but who will be the examiners? On what ground will they judge? What will be their criterion? What level of capacity will be required of each voter? This is the establishment of an electoral mandarinate and nothing else.

Well then! I ask again the question to those who hold suffrage to be a male privilege: is suffrage a right or a function?

If it is a function, do not accept anyone but the capable to fulfill it; institute an electoral baccalaureate; bar access to all who are unfit or ignorant. Please decide boldly: the more suffrage is limited to a smaller number of citizens, the more powerful your suffrage will be. Choose from the nation an Areopagus [1] which represents all its virtues and all its intelligence. And why even an Areopagus? Take one man, the one you think is the fittest and the best. But who will choose this man? Himself or God. With the suffrage as a function, you end up with the absolutism by given right, that is to say with the negation of suffrage.

But what if suffrage is a right? If all those who have a share in the burdens of the nation are indeed interested in the good management of its interests, why should it be the prerogative of men? Why would a part of the nation pay taxes, suffer the repercussions of political upheavals, of government measures, without any mean of control? Would women not have the right to say to men: you do not want us to get involved in common affairs; very well: but in this case, we shall break all solidarity with the nation, we shall refuse to pay taxes, we shall put ourselves in a state of insurrection against all the laws that you impose on us, because we are exiled from the legal country. The rule of restricted suffrage is nothing else but the right to insurrection. There is only one answer to this argument: it is strength.

Is this a solution? Is this an answer? It was the answer of the government of Louis-Philippe to those who were not content with the census system.

Against the rights of women, one invokes, at this moment, the arguments invoked by all the aristocracies to maintain their privileges: against women’s claim one makes a weapon of the servitude in which they are presently held. The issue is to set them free; we are told: — you cannot set them free, because they are slaves. Women are held, at this moment, in marital servitude: how can you ask for the right to vote?

As for us, we turn the question around, and we say: women are held in conjugal servitude because until now men have had the privilege of making the law: this privilege must be ended in order to give freedom to women.

There is an indisputable historical law that can be defined as follows: progress is the liberation of the individual.

At the beginning of societies, we see a master in the patriarchy, the clan, the gens, the phratry; around and below this master are the individuals linked to him by personal obligations. In the feudal society, every man is a vassal: there is no one who does not find someone above him, to whom he owes homage. From the clan, from the vassalage, we descend to slavery and serfdom, which are only most absolute and blatant forms of human servitude. Humanity only advances further by breaking this chain that binds together every individual.

Because of their weakness, women should be placed in the dependence of men. The Laws of Manu [2] say: “A woman, during her childhood, depends on her father; during her youth, on her husband; her husband once dead, on her sons. If she has no son, she depends on the close relatives of her husband; for a woman should never govern herself as she pleases.” The same applied in Greece and in Rome. The personality of woman is so absorbed in that of the man, that in Athens a husband can choose before his death a second husband for his wife! In Christianity, women represent evil, Satan, and they remain crushed under the rule of men. The draftsmen of the Code Civil, imbued with the prejudices of Roman law and canon law, condemned woman to perpetual guardianship: today she is still a thing in the hands of men, to the point that the law goes so far as to excuse her murderer. These are remnants of barbarism; we will get rid of it as soon as we understand the notion of individual right, of which we have so far had only a brutal and selfish instinct.

But if today we can profess that the emancipation of man implies the emancipation of woman, personal servitudes will disappear to make way for ever-terminable obligations of specific services. Women will regain their complete independence and they will no longer owe obedience to their husband.

The issue of suffrage must be brought back to these terms: in our society, a woman is not considered as an individuality: however, progress consists in emancipation from the obstacles which nature and society placed in the path of the development of the individual. The recognition of women’s right to suffrage is therefore the necessary consequence of the declaration of human rights.

See around us the peoples who have known how to conquer and preserve freedom, who place individual freedom above all other consideration: there women are obtaining more and more freedom; the young girl is no longer in guardianship; her parents no longer dictate her life against her will. She chooses her husband herself. It is also among these peoples that the issue of women’s suffrage has been raised. Miss Martineau [3] brought it back from America. In 1869, she ran for the House of Commons.

In England, however, since universal suffrage is not considered as a right, one can logically reject women from the ballot. It is not the same in the French democratic system. Committed to equality we renounce our principles by declaring that women should not have the same rights as men although they bear the same burdens.

As for those who argue against its expediency, beware! It is with this argument that the conservatives of all times and of all regimes have sought to postpone all reforms.

Open to women the rights that belong to them just like any other individuals, and from this day onwards women will know how to regain their freedom. It was the despotism of men that created the ties with which the subjected women.

Because men want to keep women under their control, they want them to be simple-minded. Fathers and husbands give them the education of Chrysale. [4] It is pure logic.

Yet what is the result? This education extends to their sons. They want to bring women back to the 18th century when they are already in the 19th century: hence the great tension that separates French society: one part moving forward, the other wiggling backwards.

There is no intelligent man who does not complain about this: however nobody seems to care about the cure. Woman are educated for subjection.

But then this other problem arises: before recognizing women’s rights, do we have to wait until women are actually able to exercise them?

Replying in the affirmative would only mean dismissing any demand made throughout history by the oppressed against their oppressors. It was the answer of the slave owners to the abolitionists: when the negroes will prove able to be free, we will set them free! Only, since our interests force us to condemn them to a perpetual incapacity, we will never set them free.

We, French Republicans, we who have taken as our motto: liberty, equality, we cannot use with regard to women the same language that the American planters used regarding negroes, and therefore we must admit women to the practice of all political rights, which until now have been the monopoly of men.

[1] A council of the most able and eminent judges and public officials.

[2] Indian set of rules from the 2nd century CE. 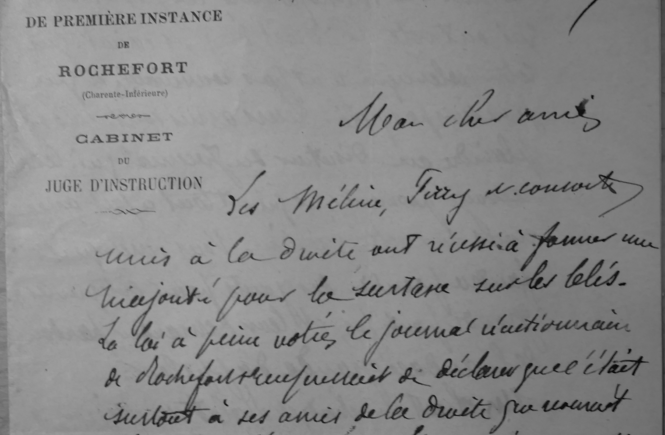 The Light from Paris: French excellence in economics. By Benoît Malbranque.